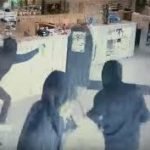 Introduction………SEATTLE—Regina Liszanckie was about to head to work when she got the text from the owners of the business next door to hers: The razor-wire-topped chain-link gate and front door to her building were swinging open, and a single jar of marijuana lay on the ground beside the gate. She had been robbed.

Four months earlier, in September 2017, Liszanckie’s business, Plantworks, had joined the thousand-plus other “producer-processors” licensed to supply Washington’s burgeoning trade in recreational marijuana. She and her partner set out to grow high-end “craft” weed in 2,500 square feet of an anonymous industrial strip in Seattle’s North End. On the night of the break-in in January 2018, Plantworks had a full crop—26 pounds of high-quality dried, cured flower, worth about $52,000—ready to deliver to local cannabis shops.

The thieves, recounts Liszanckie, bypassed the live plants and headed straight for the ready-to-sell stock, cleaning it out. It was devastating.

Liszanckie asked around and discovered she was just one in a rash of growers in and around Seattle who’ve suffered similar break-ins, six of whom consented to be interviewed for this article. Their accounts followed a pattern: The burglars came in the wee hours and speedily cut the electricity to the security cameras and alarms. Sometimes they smashed through walls to get in, avoiding the alarms on the doors. Because even the legal grow operations tend to be unsigned and inconspicuously located in small warehouses and industrial strips, the noise went unnoticed. And the burglars chose their targets well: Bypassing large grow operations with highly secure, purpose-built facilities, they hit smaller, more vulnerable growers producing high-end, easy-to-move weed.

Mass State Supervisor Says State Dept of Revenue can, ” refuse to release a city-by-city list of how local marijuana taxes are distributed”

States That Might Legalize Cannabis By the End of 2021