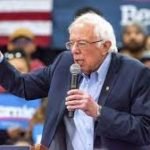 It might be all moot now as Joe is on the upswing and that’s not the best of news for the cannabis sector. Recently Bernie indicated at various campaign rallies that he would legalize by executive order and expunge criminal convictions by executive order. That set the legal twittersphere alight and Above the Law editor Joe Patrice decided that now is a good a time as any to dig into the nub of what Bernie could or could not do, if by any chance he gets elected. First there’s Joe and then the Donald to get past!

Patrice writes by way of introduction to his piece…

Bernie Sanders says a lot of stuff out there on the campaign trail to fire up his supporters.

At a recent event in Los Angeles, he hit on an issue that’s a high priority for both civil libertarians and criminal justice reform advocates alike: marijuana legalization.

The reaction from the more sanctimonious sectors of Legal Twitter started ripping Sanders for not understanding legal basics. There were a lot of cracks about how executive authority works and administrative law and even federalism. What most of these folks missed though was that Sanders is… mostly right about all of this.

While it may pain lawyers and quasi-lawyers, the first step to untangling the Sanders position is getting past semantics. Can a president legalize drugs by “Executive Order”? Not really. Can a president, through his or her executive authority, order this to happen? Yeah, pretty much. Once you’re not hung up on the Executive Order term of art this isn’t particularly controversial. The Controlled Substances Act defers authority to the Executive Branch to determine where specific drugs are scheduled and, by extension, just how much of a federal crime you’re committing when you’re using.

Specifically, the law defers authority to the Attorney General to “remove a drug or other substance entirely from the schedules.” That said, wholesale removal would trigger an international law wrinkle. There are a number of international conventions that place the United States under an obligation to keep marijuana controlled. Now, the Trump administration tried to pull the U.S. out of the Universal Postal Union — the treaty that controls international mail standards! So it’s not like the precedent isn’t set to walk out on those obligations.

We highly recommend reading the full article at

Michigan Has Already Sold $32 Million of Weed, But Wants to Restrict Legal Caregivers