Boston Has A New Cannabis Board 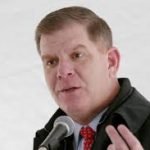 WBZ News Radio reports…….Boston Mayor Martin Walsh has finalized the members of his newly-created cannabis review board, which will be oversee the local approval process for all marijuana license applications within the city.

The announcement comes after Walsh partnered with Councilor Kim Janey and the Boston City Council in November 2019, signing an Ordinance Establishing Equitable Regulation of the Cannabis Industry in the City of Boston. The ordinance aims to ensure Boston is a model for how cities can develop a legal cannabis industry that fosters racial equality and inclusion.

According to the ordinance, the Board was established because “certain racial and ethnic groups, in particular Blacks and Latinos, have been disproportionately arrested and incarcerated for the use and distribution of cannabis and other drugs due to the so-called ‘War on Drugs,’ and to date, no certified minority-owned businesses have been licensed by the state’s Cannabis Control Commission.”

It also cites the law which “requires the development of ‘procedures and policies to promote and encourage full participation in the regulated marijuana industry by people from communities that have previously been disproportionately harmed by marijuana prohibition, and enforcement and to positively impact those communities.'” It says the neighborhoods particularly impacted in Boston include “Roxbury, Dorchester, and Mattapan.”

Here’s more on the five new members of Boston’s new Cannabis Board:

Kathleen Joyce will be Chair of the Boston Cannabis Board. Joyce has been Chair of the Licensing Board for the City of Boston since October 2018. She was previously Senior Counsel at the Boston Planning and Development Agency, and before that she spent seven years as the Director of Government Relations and Public Affairs at the Boston Bar Association. She graduated from the College of the Holy Cross, and Suffolk University Law School. She lives in Dorchester.

Monica Valdes Lupi, JD, MPH is the former Executive Director of the Boston Public Health Commission. She is also a Senior Fellow at the de Beaumont Foundation, where she has spent more than 20 years advising and leading efforts to advance a health agenda on issues like tobacco and e-cigarette flavor control, racial justice, and health equity. Valdes Lupi has also served as the Deputy Commissioner for the Massachusetts Department of Public Health. She earned her BA from Bryn Mawr College, her MPH from BU School of Public Health, and her JD from the Dickinson School of Law/Penn State University. She lives in West Roxbury.

Darlene Lombos was the first person of color to lead the Greater Boston Labor Council, representing nearly 100,000 workers in the region. She was unanimously voted to the position by delegates representing 160 labor unions like construction, hospitality, health care, transportation, and education. Lombos is also the former Executive Director of the non-profit organization Community Labor United. She has many years of experience in community and youth organization, and coalition-building. She lives in Roxbury.

Lisa Holmes is the former Superintendent of the Boston Police Department, who has more than three decades experience in public safety. One of the first members of the BPD Gang Unit in the 1990s, Holmes worked as a detective on the department’s toughest cases of sexual assault, homicide, and human trafficking. Holmes was also the first African-American woman to lead BPD’s police academy, strengthening the community policing-based training. Holmes got her BA in Criminal Justice from Curry College, her Masters in Counseling Psychology from Northeastern University, and her Graduate Certificate in Leadership and Management from Suffolk University’s Moakley Center for Public Management. She lives in Dorchester.

John Smith is the Director of Programs at TSNE MissionWords, a nonprofit that works to improve communities and fight for social change. He is also the former Policy Analyst in the Mayor’s Office of Economic Development for the City of Boston. He has previously worked at Greater Boston’s Fair Housing Center, the Hyams Foundation Youth Policy Initiative, and the Tennessee Department of Health. Smith got his Masters in Public Policy from Tufts University. He is originally from Trinidad, and he lives in Dorchester.

WHO Delays Rescheduling Vote Yet Again – Now We Are Told “Maybe December 2020?”

Vertical Disintegration ! Canada’s Canopy Closes Two Giant Greenhouses & With Them Up To 500 Jobs Could Go