A Guide to Curing Marijuana Buds for the Best Taste

A Guide to Curing Marijuana Buds for the Best Taste

Grow Tent Placement: The Best Spot for Your Setup

Booster Nutrients for Growing Cannabis: Are They Worth It?

Indoor vs Outdoor CBD: Which is Better?

How to Dry Marijuana Right – Enhance Effects and Flavor

Where in the USA is Cannabis Legal to Grow?

How Long Does It Take to Grow Weed? A Beginner’s Guide

Like many living things, cannabis plants come in two sexes, male and female, which blend their genetics through pollination to produce seeds. These seeds then, have about a 50% chance of inheriting the sex of either parent. However, male cannabis plants produce very few cannabinoids, which faces many growers with the prospect of scrapping about 50% of their crop (unless, perhaps, they’re making their own rope). For this reason, we have developed feminized seeds. But just what are feminized seeds, and where do they come from? The answer is a remarkable feat of genetics and horticulture.

What are Feminized Seeds?

Feminized seeds are cannabis seeds genetically guaranteed to grow into a female plant. Female plants produce far more THC and CBD than their male counterparts, but once a female plant is fertilized, resources and energy are diverted from growing rich, sticky flowers, to growing a healthy crop of seeds instead. Those seeds are, of course, wonderful and necessary, but they may inherit the gender of either parent, and, as we have seen, males are nearly useless for harvesting cannabinoids.

When growing for cannabinoid production, pumping water, fertilizer, and time into your plants only to find half are male can be frustrating to say the least. A single male plant can pollinate an entire grow room, leaving whole crops producing seeds instead of flowers. Additionally, inspecting your plants for male attributes and removing them from the grow room takes time and attention that could otherwise go to treating female plants. For this reason, we have learned how to breed feminized seeds – seeds that we know will grow up to be female, and produce lush flowers rich with therapeutic cannabinoids.

How Feminized Seeds Are Made

Female seeds must come from two female parents, which on the surface sounds impossible. But under extreme circumstances, female cannabis plants can produce their own pollen. So the first step toward feminized seeds is inducing pollen production on a female plant.

The primary method is to douse the flowering sites with a solution of colloidal silver, or less commonly, with gibberellic acid, for about two weeks once the flowering stage has begun.

These chemicals will suppress the hormone ethylene, which causes the plant to produce male characteristics instead, including pollen sacs. And since the plant is still genetically female, the pollen within will carry 99% female genetics (a small margin of mutation is unavoidable). This pollen can then be harvested and applied to a flowering female plant to produce seeds with purely female genetics.

The less common, but more natural, method is called “rodelization,” often favored by organic growers. Near the end of a cannabis plant’s life cycle, unfertilized females will begin to express male pollen production as a final effort to continue their genetic line. This usually occurs after the prescribed time frame for harvesting, but not always. In fact, many growers keep a sharp eye out for these “nanners” – the banana-shaped growths that protrude from flowers – because they are capable of fertilizing other plants as well, thus halting flower production. 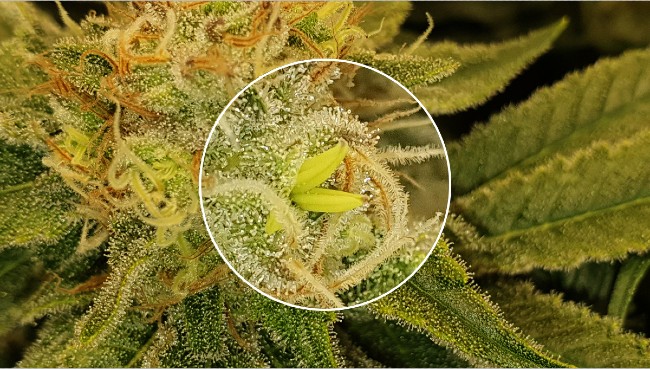 These "bananas" form in an effort for the plant to try and self-pollinate. photo credit

There is a debate among growers about the viability of this method because some believe hermaphroditic plants primarily produce hermaphroditic offspring. Others insist that offspring are not more inclined to be hermaphrodites, but rather may be more easily induced to be hermaphrodites, and that hermaphroditism has less to do with genetics than external stressors (high heat, nutrient lock, physical damage, etc.). Regardless, most growers agree that rodelization is less effective and carries a higher risk of accidental pollination. For this reason, it is more often used by more experienced or meticulous growers who want to maintain the organic integrity of the plant.

Feminized seeds have become the industry standard, especially for home growers who do not have the space or resources to scrap half of a crop that turns out to be male. Many sites now default to offering feminized seeds, some growers have undoubtedly planted them without fully understanding the science behind them. And one thing that makes these seeds so popular is that you can, you can grow them without knowing what they are or how they exist, and they will still deliver a lush, low-maintenance cannabis plant.

This is also a great process to practice if you want to take your growing skills to the next level. So next time you find some nanners growing in your bud, don’t panic, but rather appreciate the opportunity that has presented itself, and try breeding your own feminized seeds.

Do you prefer to grow with feminized seeds, or have you ever made you own? Share your experiences in the comments!

Booster Nutrients for Growing Cannabis: Are They Worth It?