Sterilising cannabis: comparing all the options

The discussion about the sterilisation of medicinal cannabis creates two camps. In particular, the procedure required in the Netherlands, which uses the mildly radioactive cobalt-60, is regularly criticised by patients as well as by some medical experts. This is because consumers are traditionally sceptical about the use of radioactive components, even if this method has been shown by many studies to be harmless, at least as far as food is concerned. However, as yet no studies have been carried out on irradiated medication that is steamed or smoked like cannabis.

The guidelines and threshold values are strictly defined in EU member states, and so far there are no indications of damage to health from the consumption of these products, either as food or medicine. With its regulation on medicines that are radioactive or have been treated with ionising radiation (AMRadV), Germany has the strictest regulations in Europe for irradiated food. AMRadV states that all medicines that are processed using radiation have to undergo a licensing process. This means that the cannabis sold in German pharmacies that comes from the Netherlands, where sterilisation with Cobalt-60 is mandatory, should have a licence under AMRadV, but so far it does not.

Slight changes in the terpene profiles

In 2016, Arno Hazekamp, who works as a biologist for Bedrocan and is regarded as one of the pioneers of cannabis research, was the first to publish a Study on the effects of low-level gamma radiation on medicinal cannabis. The results of Hazekamp’s study showed no changes in the THC, CBD or moisture content of the buds, although a minimal reduction in some terpenes was found. As only a few terpenes were lost, the terpene profile of each variety was barely affected. However, the difference in the overall profile was clearly visible in the varieties tested. The samples were compared before and immediately after the standard gamma irradiation treatment, and then analysed visually and using analysis methods such as gas chromatography and high performance liquid chromatography. 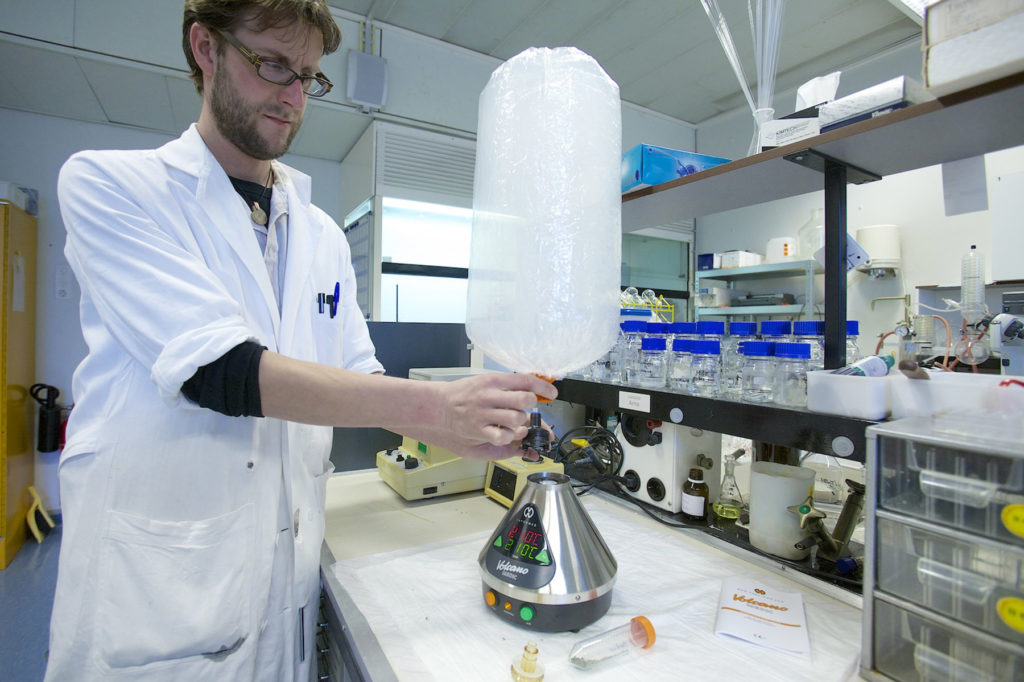 In the analysis, the most affected terpenes were the monoterpene myrcene, cis-Ocimene, and terpineols such as gamma-selinene, Eudesma-3,7(11)-diene and gamma-selinene. This may be because these more volatile terpenes evaporate more rapidly once their molecules are “accelerated” by the gamma radiation. Interestingly, the losses were not the same for all varieties. The myrcene content clearly dropped in two varieties, while in a third variety the change was negligible.

Myrcene is present in high concentrations in cannabis varieties that smell of “cool forests”. Along with cannabis, it is frequently found in some varieties of pine, juniper, some varieties of amomum, mint, sage, cumin, mango, fennel, tarragon, dill, mugwort (wormwood), angelica and hops. Myrcene is used in the manufacture of aromas and flavourings in the perfume industry and in pharmaceuticals.

Finally, the study determined that terpene content may be reduced, but that no new substances are created by the radiation processing. “The gamma irradiation will speed up the evaporation (of terpenes) a little, but will not kill or destroy your cannabis.”

Unfortunately, the national cannabis agencies in Germany, the Netherlands and Canada have not so far instigated any research into the sterilisation of medicinal cannabis or into their terpene profiles. That is why Bedrocan’s endeavours to work transparently and carry out its own research are of vital importance. It would, however, be desirable from the patients’ point of view if the research and confirmation of this were not left entirely in the hands of the manufacturers. Other developments in the pharmaceutical industry in the last 150 years have shown what this can lead to in an industry that is currently suffering from a form of gold-rush fever. 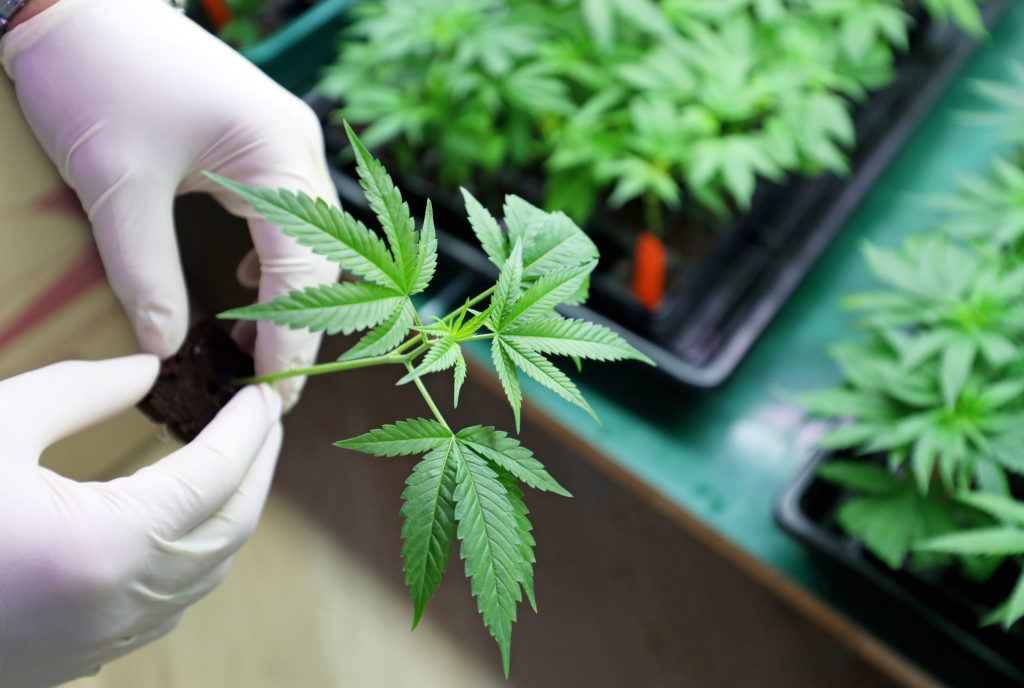 Alternative methods tend to be more time-consuming, so also more expensive. Producers who do not use cobalt-60 radiation usually combine several of the following methods of sterilisation.

Processing with ozone destroys all micro-organisms on the surface, but it is a highly reactive substance and therefore very ephemeral. Radiation with UV light has proven helpful, but in many cases it is not adequate on its own. Experts recommend an additional treatment with one of the methods listed below if the manufacturer does not want to use cobalt-60 sterilisation.

There is also a very promising new method where plants are treated briefly with steam. This very brief contact (20 to 40 seconds) with high-pressure steam at a temperature between 102°C and 122°C allows herbs, powders and spice that are sensitive to heat to be decontaminated without affecting their quality.

Ultrasound cleaning has also yielded some very promising results in the medical field in recent years.

Fumigation with ethylene oxide kills bacteria, viruses and fungi and was used for a long time in Europe to sterilise food and medicinal plants. In Germany, the use of ethylene oxide for food was banned in 1981, although the gas can still be used in Canada and the US with certain restrictions.

Stringent cleanliness is the best protection

As the  threshold values also apply to medicinal herbs grown outdoors, it should be fairly simple for producers of medicinal cannabis to comply with them without radioactive treatment. Unless you are a manufacturer in the Netherlands, where the law does not leave the manufacturers any other option.

Unlike St John’s wort or sage, cannabis is cultivated in hermetically sealed rooms. As neither the Canadian cannabis agency nor the German Federal Institute for Drugs and Medical Devices (BfArM) prescribe sterilisation using cobalt-60, radioactive treatment seems unnecessary. In view of the current price per gram of around EUR 24 and the extremely stringent hygiene regulations, medicinal cannabis does not need to be treated radioactively just to make sure. Other methods are certainly adequate. This is demonstrated by the fact that at least 12 varieties from Canada that have not been treated with radiation effortlessly pass strict checks before being allowed into German pharmacies.

As mentioned above, irradiated buds need to have a licence in Germany under the AMRadV. However, up to now the relevant authorities have not received a single application for such a licence, as confirmed in reply to our inquiry in October. In fact, this should be submitted by the Dutch trading partner and approved by the BfArM in Bonn before the buds reach any German pharmacies. The same applies to any varieties that are treated with cobalt-60 from Canadian cannabis suppliers. 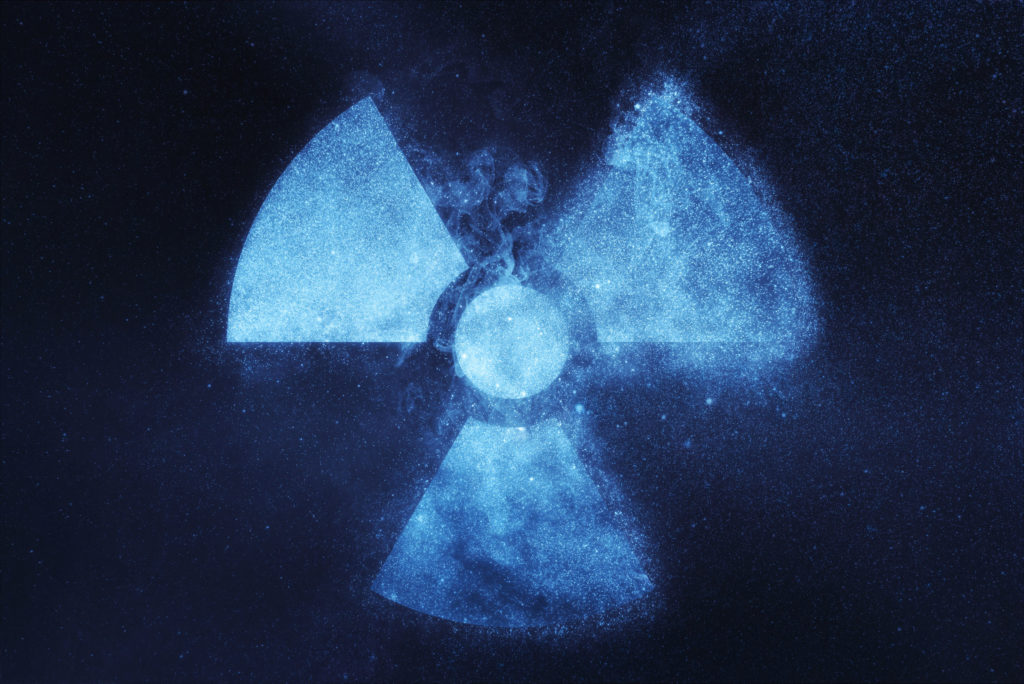 Strictly speaking, all buds irradiated with cobalt 60 are currently being sold illegally because they do not have the statutory radiation licences. The BfArM has been aware of this since at least early September, following a press inquiry, and has so far not seen the need to take any action, neither have the regional health authorities who are responsible for bringing the product onto the market. No need for action means that patients still do not know whether and which Canadian manufacturers use cobalt-60 for sterilisation, nor whether the threshold value is respected in practice.

Passing the buck instead of swift action

After being asked about an obvious error in the context of a routine press conference, the Berlin Regional Office for Health and Social Affairs (LaGeSo), the BfArM, the Berlin Senate Administration and the Federal Ministry of Health shifted the responsibility around among themselves, instead of actually examining the question is detail.

After a tip like this, it would have been better to take immediate steps towards obtaining the missing licences for irradiated cannabis buds from the Netherlands. Germany needs to inform the Dutch exporters about the missing licences and invite them to send the necessary papers to Bonn immediately. The import of medicinal cannabis from the Netherlands is already highly complex and requires numerous permits and certificates. Approval under the AMRadV would therefore just be one of many steps that would help to create the legally required and necessary transparency for patients and doctors regarding radioactively treated medicines.

It would not be helpful to patients if the German Federal government were to stop imports now because of the lack of this submission. On the contrary, it is now their job to provide clarity and security and not endanger the regular supply of cannabis buds.

No Bake Sweet And Salty CBD and Cannabis Energy Bites

Cannabis in Russia – Laws, Use, and History

Cannabis in Namibia – Laws, Use, and History

Cannabis in Japan – Laws, Use, and History

Cannabis in Tajikistan – Laws, Use, and History