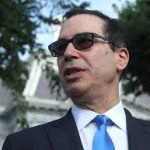 Marijuana Moment reportsTreasury Secretary Steven Mnuchin said on Wednesday that he will not take administrative action to protect banks that service marijuana businesses from being penalized by federal regulators, stating that it’s up to Congress to resolve the problem.

During a hearing before the House Appropriations Financial Services and General Government Subcommittee, Rep. Charlie Crist (D-FL) pressed the secretary to use his authority to instruct regulators not to punish banks for working with state-legal cannabis businesses.

“We have limited abilities [under existing guidance] to direct this issue,” the Mnuchin replied. “I would encourage Congress one way or another, without me making a policy view of dealing with this issue. The conflict is a problem. In which direction it is resolved I leave that to Congress and other experts.”