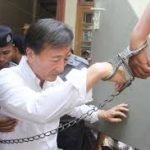 MANDALAY—A missing US citizen who was charged by a court in Myanmar with growing cannabis fled the country on a new passport and is now back in the United States, a source who personally knows him has confirmed to The Irrawaddy.

John Fredric Todoroki, 63, was arrested by Mandalay police in April 2019 along with two locals for operating an alleged marijuana plantation in the Myotha Industrial Park in Mandalay Region.

Todoroki claimed he was raising a cannabis crop consisting of hemp plants—not marijuana—and had been given permission to do so by regional authorities. Hemp and marijuana are two different species of cannabis.

Todoroki spent nearly four months in detention at Myingyan Prison until the court granted him medicalbail, set at 325 million kyats (about US$232,380), in July, as he had developed respiratory problems in prison. He was released after a bail bondsman signed a guarantee covering the amount.

His lawyers submitted an appeal to the regional court asking it to scrap the case, saying their client had official permission to operate a hemp plantation. But the court rejected the appeal in November.